When God closed the Red Sea on the Egyptians, he also caused lightning, torrential rain, high winds, earthquakes and much more…

The closing of the Red Sea, and the resulting drowning of the Egyptian Army is a commonly told story in the bible and in books and movies like”The Ten Commandments”. 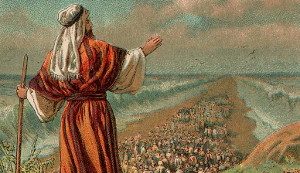 The full story of what happened at this event can be pieced together by reading several bible sources, and the full story is more than just a wall of water drowning the Egyptians.  God unleashed his power in a way never seen before.  There was torrential rain, hurricane force winds, lightning directed squarely at the army of Pharoah, earthquakes that ripped open the ground and swallowed Egyptians and much more.

Imagine the horror of seeing the world’s most powerful army arrayed against you, to destroy you, your wife and your children.  This is the position of a million unarmed Jewish men, women and children, as the entire Egyptian army surrounded them and trapped them with the sea to their backs.  There was no escape.

In the midst of this hopelessness situation, God began to deliver them:

The armies of Egypt charged after the children of Israel, intending a great slaughter.

Can you picture in your mind this great deliverance?  Can you picture a path opened up through the water about 11.2 miles long, a path about a half mile wide, with walls of water that could have been as high as 150 ft tall.

Can you picture 250,000 Egyptians (according to Josephus), the entire army of Pharaoh charging into this path.  First to come would have been the chariots, 600 of them, having archers experienced at shooting arrows from moving chariots and racing at 20 miles an hour toward the fleeing Israelites, intending to crush men women and children under the mighty hoofs of the war horses and chariot wheels of the chariots

Behind the Chariots came the horsemen of Pharaoh, 50,000 of them, and behind them infantry of Pharaoh, 195,000 men coming at them bearing the latest weapons of war, their javelins, their bows and arrows, their shields, and their swords.  Their bodies covered by the most modern protective armor.

As the chariots of Pharaoh came within sight of the Israelites, God’s mighty ones are released by Yahweh..

They pulled wheels off the chariots, and a chariot with one wheel would dig into the ground, pulling left and pulling right, smashing into one another, chariot riders being thrown from their chariots, as other chariots behind them, ran them over.

A great mess in the middle of this half mile wide path, as the broken chariots have created an obstacle that other horsemen and infantry can’t get around, and there are so many of them, they can’t communicate in the confusion, for those coming behind the chariots running, are themselves pushed into those ahead, until the entire army of Pharoah is in one long traffic jam in the middle of the Red Sea.

Many people are under the impression that God only made the walls of water fall on the Egyptians.  That is true, but God did a lot more than that.  Let’s look at some other bible verses to get the full picture:

10 Thou didst blow with thy wind, the sea covered them: they sank as lead in the mighty waters.

11 Who is like unto thee, O LORD, among the gods? who is like thee, glorious in holiness, fearful in praises, doing wonders?

12 Thou stretchedst out thy right hand, the earth swallowed them.

High winds – The earth swallowed them

2 Samuel 22:14 The LORD thundered from heaven, and the most High uttered his voice.

15 And he sent out arrows, and scattered them; lightning, and discomfited them.

16 And the channels of the sea appeared, the foundations of the world were discovered, at the rebuking of the LORD, at the blast of the breath of his nostrils.

15  Thou hast with thine arm redeemed thy people, the sons of Jacob and Joseph. Selah.
16  The waters saw thee, O God, the waters saw thee; they were afraid: the depths also were troubled.
17  The clouds poured out water: the skies sent out a sound: thine arrows also went abroad.
18  The voice of thy thunder was in the heaven: the lightnings lightened the world: the earth trembled and shook.
19  Thy way is in the sea, and thy path in the great waters, and thy footsteps are not known.
20  Thou leddest thy people like a flock by the hand of Moses and Aaron.

Torrential rains, Thunder, Lightning, Earthquakes, all happening on a unprecedented scale and fury.

Using these bible bible verses as our looking glass to see back through history, this, is what happened.

The chariots leading the attack, had been stopped by the angels of God when their wheels were removed, all the rest of Pharaoh’s army came charging up behind, and then into the force of Chariots preceding them.  Here we have the first biblically recorded example of a traffic jam in the midst of the Red Sea.

Between two massive walls of water, the earth roared and shook violently, chasms opened up great cracks in the earth, and Egyptians were swallowed up into them alive, the life crushed out of them as the chasms closed back up

Drenching blinding, downpours, winds of hurricane and tornadic force, the heavens darkened with the dark clouds of the fury of God’s vengeance, Deafening thunder and lighting strikes with machine gun rapidity and unimaginable intensity focused squarely on the army of Pharaoh, in the middle of the Red Sea.

Despite seeing all the horrors of the ten plagues of Egypt, and the fact that we’re talking about Egyptian solders, men who are hardened by the horrors of war, when they saw God’s mighty arm for the first time, fully unbared, they truly knew fear, and they cried

“Let us flee from the face of Israel; for the LORD fighteth for them against the Egyptians.”

The walls of water, towering 150 ft over their heads, rushed at them, as the angels allowed the water to return to it’s normal properties, and the Egyptians were engulfed by the waters, instantly at a depth of over a hundred and fifty feet below the surface of the water, possibly wearing close to 50 pounds of armor on their bodies.  Instantly they were over 50 feet lower, than the recommended depth for scuba diving, with scuba gear.

They fought to free themselves of their armor, and struggled upwards against an ferocious undertow, pulling them down and out to sea caused by two massive walls of water converging.   They struggled toward the surface of the blue void up ahead for that life giving breath, their lungs burning, and then, they lost consciousness, the lungs in automatic desperation, filling themselves with sea water, and the entire Egyptian army, 250,00 men, fell back to the ocean floor, never to arise again. 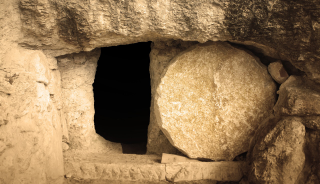 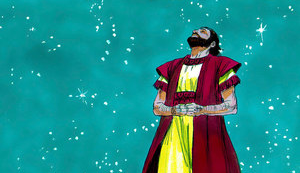